Chicken woes on my urban “farmlet”

We are down one more hen on my little urban farm. Cheep, one of the two Barred Rock hens that  I raised from day-old chicks, took sick in early June. The other hens were happy, healthy, and laying eggs. Not Cheep. She declined slowly. 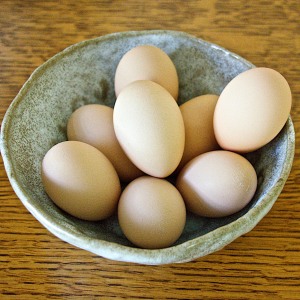 Eggs from my hens.

She had no appetite and became quite listless. I tried coaxing her with cooked hamburger and yogurt, which she ate. The hamburger adds protein to their diet, and is something I had read of other urban chickens farmers doing.  The yogurt is supposed to restore healthy gut flora and it works for hens as well. But it didn’t work for Cheep. She was wasting away. I wondered if she might have coccidiosis, or something dreadful like Marek’s, Newcastle Disease, or avian influenza. This was beyond my ability to diagnose, so I did something I had never planned on doing. I took Cheep to a vet. Finding a vet who treats chickens in urban Huntington Beach CA was no easy task. Parrots, maybe, but a chicken? Who in their right mind takes a chicken to the vet? OK, so I’m not in my right mind. Not sure, in fact, that I have ever been.

I packed poor ailing Cheep into a travel kennel (that would probably have held a Greyhound–the dog, not the bus) and off we went. The vet took a brief look at Cheep and suggested euthanasia and a necropsy. She took an extensive history of the bird’s illness, the health of the other chickens, and even my husband’s and my health. She even asked who plays with the chickens (my grandchildren), when they were last in contact, and the health of my grandchildren. Zoonotic diseases (infectious diseases spread from animal to humans) are serious business. But the good news is that an epidemic of something serious is not likely to start in my little flock of hens, who have plenty of room to roam in a low-stress environment, and who get a healthy diet of laying pellets, organic greens, and scratch.

She euthanized little Cheep and instructed me to take her body to the coroner (OK, not exactly, the vet pathologist in south county). To make a long story short, after about 10 days and over $300 in various vet bills, the vet pathologist declared that Cheep had essentially ovulated into her abdominal cavity. The yolk had burst and that had caused peritonitis. Nothing infectious. And there was nothing that I did to cause it; nothing I could have done to prevent it. Peace of mind came at a high cost.

I am slowly learning by trial and error about all of the things that can go wrong with chickens. I had one baby chick eaten by a possum (who knew that a possum could reach its paws into the large portable kennel that I was raising my chicks in?). I lost one hen to being egg-bound. My favorite hen, Henrietta the Black Australorp, died of old age, possibly heart trouble. Hens are prone to going broody and sitting on the eggs of others all summer long while not laying themselves. They quit laying when they go into molt, which they are prone to do at any time, but especially when it gets hot. They quit laying when the days get short in November, and don’t start laying again until the days began to lengthen after with winter solstice in mid-January.

My flock of hens is down to three birds. Chicken Little, the Black Sex-linked hen, is 9 years old, and doesn’t lay much any more. Miss Hillary, a Barred Rock, is about 5 years old. She is currently molting, not laying, and has never been a particularly good producer. That leaves the burden of supplying us eggs on Peep, another Barred Rock. I have renamed her Dino-peep since she has the temperament of a velicoraptor. She is a nasty-tempered thing, downright vicious, and attacks me whenever she gets a chance. I think I need a new flock. Urban chicken-keeping ain’t no bed of roses.

I'm a retired medical researcher, retired professional writer/photographer, avid gardener, and active environmentalist living in southern California. I wrote a weekly newspaper column on environmental topics in the Huntington Beach Independent for many years. I also supervised environmental restoration projects and taught at the Orange County Conservation Corps before retiring in the summer of 2016. This blog chronicles my efforts to live a green life growing as much food as possible for my husband and myself on a 4,500 sq ft yard that is covered mainly by house, garage, driveway, and sidewalks. I am also dedicated to combatting global climate change.
View all posts by Lou Murray, Ph.D. →
This entry was posted in Uncategorized and tagged barred rock, Barred Rock hens, chickens, urban chickens. Bookmark the permalink.

4 Responses to Chicken woes on my urban “farmlet”