I just posted “Woes of an Urban Chicken Farmer” or something like that. Now it is time for “woes of a backyard gardener in a changing climate.”

Earlier, I posted about the low number of winter chill hours that we got in southern California during our unseasonably warm 2014-2015 winter. That, coupled with record-setting drought (four inches of rain last season), has most definitely affected our fruit harvest this summer. For example: 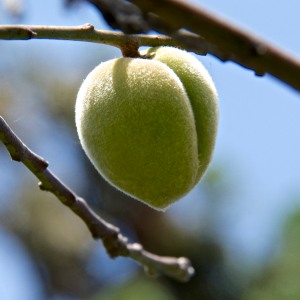 This will be the entire harvest from our Babcock peach tree, assuming it survives the night critters.

My fruit trees are blooming sporadically this year, multiple times. They are so confused, they don’t know when end is up. The Babcock peach went through two bloom periods. One peach set from the first bloom, but the night critters ate it. This second peach (above) is the only one that set from the second bloom cycle. It is of moderate size, but not ripe yet. It will be a race to see who gets it first: rats, possums, raccoons, or me.

Here is the lone peach that set on the Garden Gold ultra-dwarf peach tree. 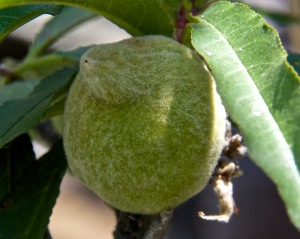 The fact that we are getting a nice looking peach growing on the Garden Gold tree is a real surprise. This tree requires 450 winter chill hours and we got around 80. Go figure. 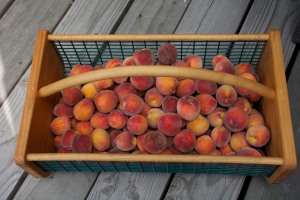 This was part of the harvest this spring from our Florida Prince peach tree.

Looks great, huh? Well those peaches were the size of golf balls, a complete nuisance to peel and pit, even after dipping them into boiling water. I managed to freeze four packs of sliced peaches, and we enjoyed a number of peach dishes such as peach upside down cake. But a lot of them went bad before I got around to processing them.

I managed to harvest a dozen really small and kind of dry Panamint nectarines. The night critters got the ones that I was letting get a little riper. Bummer. But these nectarines had the best flavor of any I had previously gotten from that tree.

The Snow Queen nectarine produced one nice looking, large nectarine. They are so delicious. But this year, the darn night critters got it before I did. Curses, foiled again!

The peaches aren’t the only trees to undergo a multiple round of blooming. Our apples trees are doing the same thing. In fact, the Granny Smith apple tree has bloomed three or four times so far this year, with different branches blooming at different times. 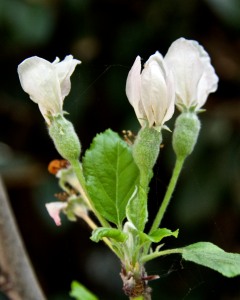 Three apple ovaries appear to have been fertilized in this cluster of five flowers. My Granny Smith apple tree normally blooms in May, but this year it has been blooming sporadically since March. It is still blooming and apparently setting fruit here in late June. Global weirding. 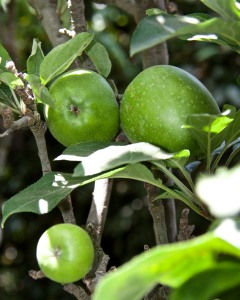 The two apples on top are Granny Smith, while the little one on the bottom is a Gala. Two different trees, side by side.

I had been hoping for a dozen Granny Smith apples, but one of the heavier night critters got into the tree and broke a branch with three nice apples on it. I should still have enough for a pie later in the season, God willing and the creek don’t rise. 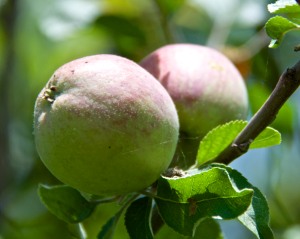 The semi-dwarf Fuji apple tree has done itself proud this year, setting about 25 apples.

We did NOT get enough winter chill hours for apples to be setting fruit this year, but here they are. I got a tip that removing the leaves in the fall would help apple trees in warm climates set fruit. I removed the leaves from the Fuji and Granny Smith trees in late November (it was too warm for the leaves to die and fall naturally). This forced the trees into dormancy. It looks like that neat little trick is going to work. 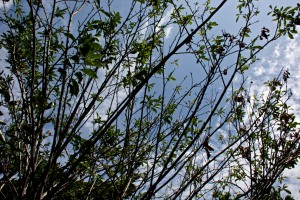 The Santa Rosa plum tree has only half leafed out. Ditto our nectarine and peach trees, except for the Florida Prince peach, which requires very few winter chill hours. 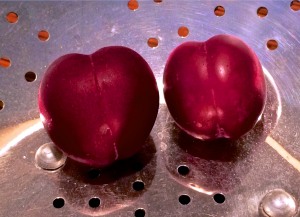 That’s it for the plum harvest. Two really small plums. But they were really, really good.

My grape arbor has two grapevines that are five years old and should be producing grapes by now.

But so far, I have yet to taste a single grape. This is the best I have done so far, a bunch of half-grown grapes. There are actually two bunches, with this being the most complete. Looks like a lot of the flowers didn’t get fertilized. Last year, the grapes dried into raisins before getting large and ripe. It remains to be seen if the birds will eat these before I do, assuming they even ripen.

But enough of my woe in the orchard. On to my woes in the vegetable garden! 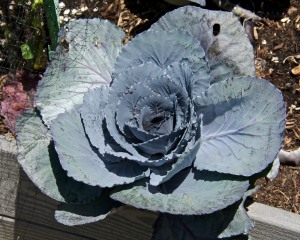 I am giving up on my red cabbage crop. One plant made a tennis ball sized head, but the other seven plants look like this–no head. I guess I will just feed them to the chickens. Thank you, unseasonably warm winter.

My cauliflower is so pathetic that I couldn’t bring myself to post a photo–too embarrassing. The heads were really small, and they bolted before I got them harvested. But bolted cauliflower still works in a stir-fry. 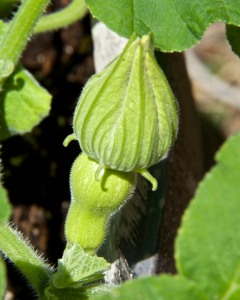 Normally, squash will produce a number of male blossoms first, then the female flowers will open. Not this year. Not in my garden. The silly things are producing female  flowers before the male flowers have opened. Global weirding strikes again? 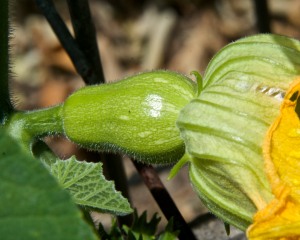 Two female butternut flowers opened today, but if there were no male flowers in someone else’s garden within bee-flying distance, they won’t have been fertilized. I should know in a couple of days.

So far, I have NO summer squash. How pathetic is that, not even able to grow a zucchini? I think I will give up on trying to grow them in the front veggie bed. There just isn’t enough sunlight on that bed. 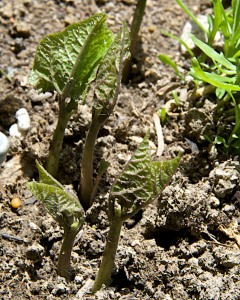 I planted some scarlet runner beans about a week ago, carefully spacing them about 2-3 inches apart. The seeds appear to have migrated underground, clustering all in one place. Go figure. Only about a third of the seeds have sprouted. VBS. I will wait a few more days and then replant the bare areas.

I really haven’t planted my summer garden yet since my winter-spring garden is lagging so badly. I am giving up on the cabbage and cauliflower and planting the summer garden soon. Real soon. If only the weather would cool off. We are having August weather in June and it has been too hot for me to work outside. I did manage to harvest the rest of my onion crop, however. 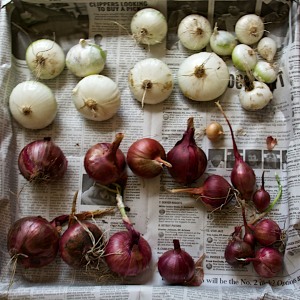 I have been harvesting and eating onions for some time now, but the tops of the remaining ones have died. Time to pull them and make room for something else. Here they are. They are so small that I often use several in one dish. I think I got about a third of the onions that I got last year, even though I planted the same number of seedlings both years.

Normally, I wouldn’t be harvesting the bulk of the onion crop until August. Again, we are having August in June. And the onions are small this year, too small to bother entering any into the Orange County Fair, which starts a week from Friday.

“Our” Angus calf Bucket will be at the fair. We own a 1/8th interest in the meat. So far, he has placed second and third in the two contests where he has been exhibited.

I will close with a photo of my butterfly garden. 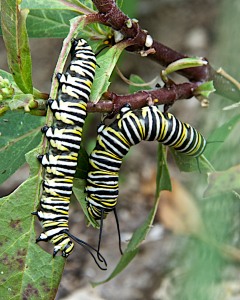 It’s SUPPOSED to get eaten by caterpillars. We have hatched out a LOT of monarchs in the time we have been growing our butterfly garden.

I don’t think my 2015 garden is going to be my best ever. It certainly isn’t so far.

I'm a retired medical researcher, retired professional writer/photographer, avid gardener, and active environmentalist living in southern California. I wrote a weekly newspaper column on environmental topics in the Huntington Beach Independent for many years. I also supervised environmental restoration projects and taught at the Orange County Conservation Corps before retiring in the summer of 2016. This blog chronicles my efforts to live a green life growing as much food as possible for my husband and myself on a 4,500 sq ft yard that is covered mainly by house, garage, driveway, and sidewalks. I am also dedicated to combatting global climate change.
View all posts by Lou Murray, Ph.D. →
This entry was posted in Uncategorized and tagged apples, butternut squash, Fuji, Gala, global warming, Granny Smith apples, green onions, monarch butterfly caterpillars, nectarines, peaches, plums, scarlet runner beans, winter chill hours. Bookmark the permalink.