I have been keeping hens for six and a half years now. I started with three adult hens of about one and a half years of age in the spring of 2010. I wanted pullets, but the farmer sold me hens that were pretty much at the end of their best laying years. Caveat emptor.

The hens that come to our tiny urban farmlet enjoy a great benefits package of unlimited vacations and retirement. In commercial operations, laying hens are killed after two years when egg production declines. On a real farm, they are killed whenever someone wants a chicken dinner. So I really had no idea how long chickens live. The answer is, “It varies.”

This is our chicken coop when it was new. I have since added artwork to the exterior, a bench on the inside, and perches for the hens to roost on in case they don’t want to use the roosts inside the nest box. I also added a fenced outdoor run to the left and back, and built a little door for them to go from coop to outdoor run.

Henny Penny, a black sex-linked hen, died suddenly about a year or so after I got her. To replace Henny Penny, I acquired Miss Hilary, a one and a half year old barred rock, from Centennial Farm nearby in Costa Mesa, CA. I got her in 2011 as they were culling their flock. It was the same month that Hurricane Hilary came up the coast from Mexico, hence her name, Miss Hilary. She was a handsome hen, but had a tendency to go broody in the summer and quit laying. So with Chicken Little and Henrietta getting on in years, and Miss Hilary not being a very good layer, I decided to raise three barred rock hens from chicks. I named them Peep, Cheep, and Cluck.

A new barred rock chick, one of three.

Raising chicks is a nuisance. You need special feed, special feeders for the little ones, and a heat lamp. You also have to house them separately from the big hens or the big ones will peck the little ones to death. And then it turned out that opossums can reach into the cage in which I was raising the little chicks. There went Cluck one night. I was down to two chicks.

Peep and Cheep grew into fine hens. But Cheep got cancer. I know, because I took her to the vet. I was concerned that a two-year-old hen was so sick. I worried about diseases that might be transmissible to humans. I had her euthanized, and paid a bloody fortune for a pathologist report. I was relieved that Cheep didn’t have anything contagious like Mareks disease or avian flu.

Before we lost Peep, we had five hens. The Black Sex-linked hen is not in the picture, but you can see Henrietta the black Australorp on the right, and Miss Hilary, Peep, and Cheep.

My favorite hen, Henrietta the black Australorp, died, I suspect of old age. So I was down to three hens again: Chicken Little, Miss Hilary, and Peep. Because Peep grew up into a big mean hen that attacks me every chance she gets, I renamed her Dino-peep. She seems to have the personality of a dinosaur more than a domestic fowl.

Dino-Peep, my barred rock hen that thinks she is a dinosaur.

Then disaster struck. Normally, I close the little door between the fully enclosed coop and the fenced outdoor run at night. The chickens put themselves to bed, going up on perches that I built for them in their coop. Then I go out and close and lock the little door to keep them safe from predators. But one night this summer, I forgot to close the door and a big possum got into the coop and killed poor Miss Hilary. I was down to a mere two hens. Chicken Little is so old that she only lays in the spring now, going dormant the rest of the year. What to do?

Chicken Little, an old black-sex-linked hen in back, and Dino-peep, a mean barred rock that I raised from a chick, just weren’t giving us enough eggs.

Back to Centennial Farm I went, hoping that they were about to cull their flock. They weren’t. In fact, all they had were four-month-old pullets, but they took pity on me and sold me two. I had no choice of breed, but I lucked out. They sold me a nice little black sex-linked pullet and an Ameracauna that will lay blue eggs.

We named the white Ameracauna Princess Ariel, and the black one Princess Aurora. The granddaughters love the names.

The two new girls stick together because the two older hens bully them.

We have had these two sweethearts about three weeks now, and they are finally beginning to get on with the older girls. I fed them separately for the first three weeks, and closed the door between the outdoor run and the enclosed coop for a few hours a day so the little girls could have some time to eat and drink without being harassed and chased. But they seem to have established their pecking order now, and Aurora is bonding especially well with Chicken Little, since they are both black sex-linked hens.

Ariel is quite different, and seems to be the outsider. She has long legs, a long neck, and squawks like a peacock. I just love her. 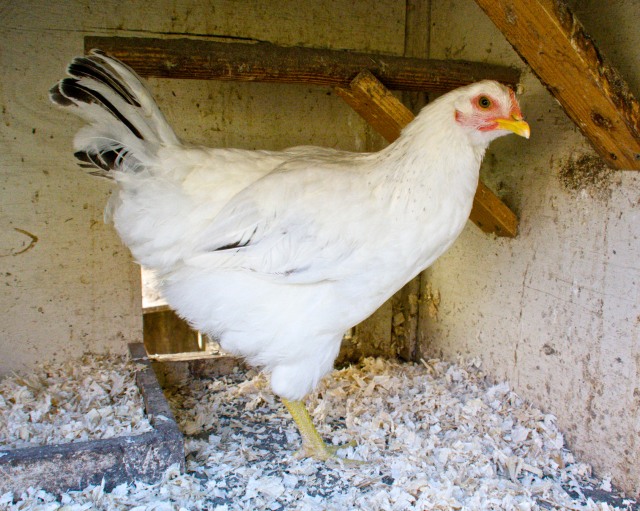 Ariel has a sprinkling of black feathers on her neck, with more black on her wings and tail.

Aurora is almost all black, with just a hint of red on her chest.

I am looking forward to when they are six months old (in December) and will begin laying. But first, their combs and wattles need to grow and turn red. It will be fun watching them grow up.

I'm a retired medical researcher, retired professional writer/photographer, avid gardener, and active environmentalist living in southern California. I wrote a weekly newspaper column on environmental topics in the Huntington Beach Independent for many years. I also supervised environmental restoration projects and taught at the Orange County Conservation Corps before retiring in the summer of 2016. This blog chronicles my efforts to live a green life growing as much food as possible for my husband and myself on a 4,500 sq ft yard that is covered mainly by house, garage, driveway, and sidewalks. I am also dedicated to combatting global climate change.
View all posts by Lou Murray, Ph.D. →
This entry was posted in Uncategorized and tagged Ameracauna, Barred Rock hens, Black Australorp, Black Sex-linked, California, chicken coop, chickens, opossums, photos, raising chickens, southern California, urban chickens. Bookmark the permalink.