The scourge of shot-hole borers

We have been infested with a new invasive non-native pest, and it isn’t pretty. This beetle is killing trees all over southern California.

The nasty little insect has the unglamorous name of polyphagous shot-hole borer. Breaking down the name, “poly” means many and “phagous” means eat. This darn beetle eats/infects almost every kind of tree, it seems.

A female beetle bores into trees, leaving a very tiny hole that is about the size of a period in this post. The female beetle carries a particular fungus (Fusarium sp) into the tree with her to feed her babies. The fungus grows and usually kills the trees whether the beetle was able to reproduce or not. The entry holes then weep sap, which makes it easy for the homeowner or grounds person to detect an infected tree.

The female beetle makes a gallery in the wood of the tree, laying eggs, which hatch into larvae. The males and females mature and mate inside the tree, and only fertilized females leave to infest other trees. They carry a bit of the Fusarium fungus with them, infecting new trees.

This pest came from southeast Asia (probably Vietnam) to Los Angeles about 2003, and has been spreading like wildfire. I live in Orange County, between LA County and San Diego County. All of those red dots are authenticated polyphagous shot-hole borer infestations. San Diego has a different kind of shot-hole borer (blue dots) that is killing trees down there.

My husband and I live near Huntington Beach Central Park, where many dozens of trees have already been lost and removed. And now we are losing trees in my little orchard, mostly my stone fruit trees.

We have already lost our Santa Rosa plum. It is dead, dead, dead. I think we are going to lose the Panamint nectarine, as it only half leafed out this year, and produced no fruit. The Snow Queen nectarine produced two nectarines this year, but the critters got them both. It is also infected.

My beloved Florida Prince peach tree is fighting back valiantly. It produced a good crop of peaches this year, which had the unfortunate timing of ripening when I was recovering from endometrial cancer surgery in May. I wasn’t able to process all of the peaches, but I did get a few pies and cobblers out of the 2016 crop. Sorry, folks, no pie photos. I was doing good to just be making pies, much less photographing them. It remains to be seen if we will have a 2017 peach crop.

This is a tiny fraction of the Florida Prince peach crop this year.

One of many colanders of peaches this spring. 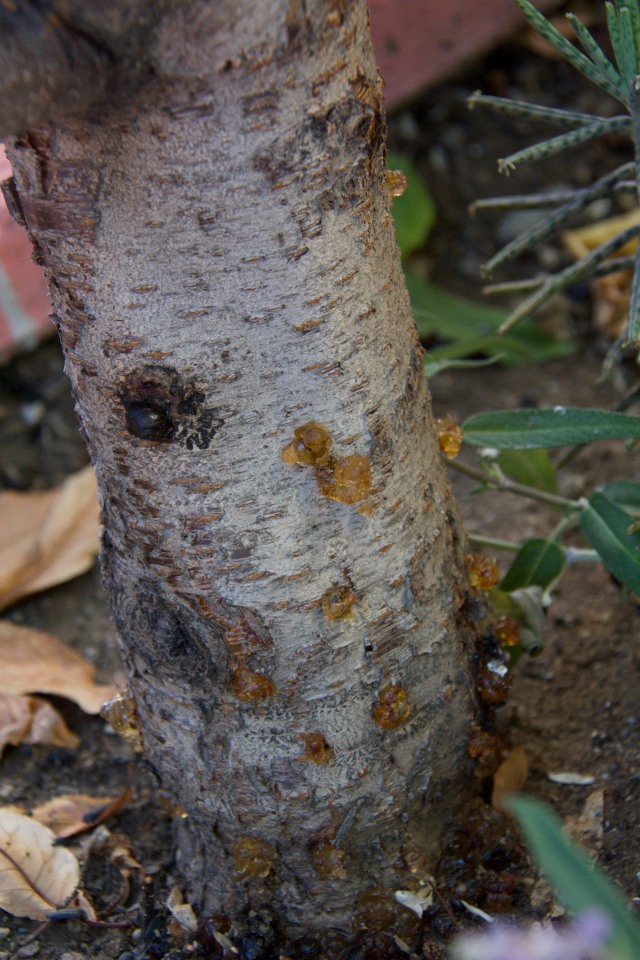 This shows sap oozing out of multiple holes in our Snow Queen nectarine tree. 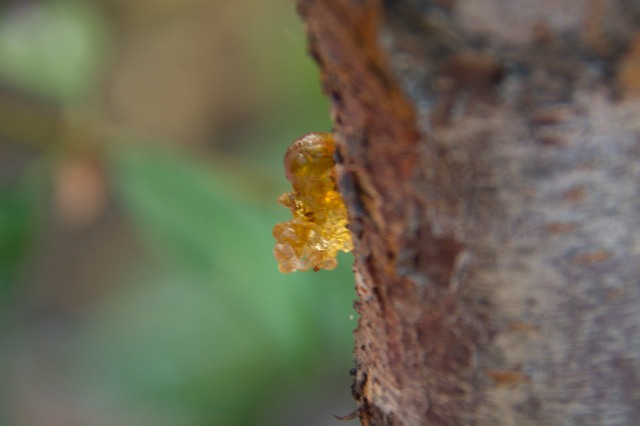 Not sure which of my stone fruit trees this is, possibly our Katy apricot. That space alien blob is sap oozing out.

These dark stains are on one of our Liquid Amber shade trees. Both are infected, but I think they are going to survive. Sure hope so, since they are pretty big trees, over 30 years old, and provide nice summer shade to our front yard.

From the University of California Department of Agriculture and Natural Resources, we learn the following:

There are several potential outcomes of a beetle attack.

Because this is a fairly new invasive species, scientists are still learning about it. So far, it has been found to infect 303 species of trees. Some pessimists say that there won’t be any trees remaining in southern California, but I have to hope they are wrong.

Sadly, the beetle can and does infect avocado trees. This could have a major economic impact to the avocado industry in southern California. So far, I haven’t seen any signs of infestation on my avocado tree, nor my citrus, apple, or Asian pear trees. My pomegranate and Fuyu persimmon appear unscathed as well. Fingers crossed.

But I have already lost a plum tree, and I expect to lose all of our peach, nectarine and apricot trees as well. This is a big blow to our effort produce food in our tiny yard, as my fruit crop is about half of the poundage of our produce.

For a PowerPoint presentation showing other trees infested with the beetle, see:

Note that the presentation linked above was created in 2008, and the number of tree species known to be susceptible has greatly increased since then.

I'm a retired medical researcher, retired professional writer/photographer, avid gardener, and active environmentalist living in southern California. I wrote a weekly newspaper column on environmental topics in the Huntington Beach Independent for many years. I also supervised environmental restoration projects and taught at the Orange County Conservation Corps before retiring in the summer of 2016. This blog chronicles my efforts to live a green life growing as much food as possible for my husband and myself on a 4,500 sq ft yard that is covered mainly by house, garage, driveway, and sidewalks. I am also dedicated to combatting global climate change.
View all posts by Lou Murray, Ph.D. →
This entry was posted in Uncategorized and tagged avocado, fruit trees, fungus, Fusarium, home orchard, invasive non-native species, map, photos, polyphagous, shot hole borer, southern California, stone fruits. Bookmark the permalink.

1 Response to The scourge of shot-hole borers