How to make a pumpkin pie from scratch

And I mean really from scratch, starting with a pumpkin.

I grew three Amish pie pumpkins this year. They are supposed to get up to 90 lbs each, but mine were small, like New England pie pumpkins. One of them rotted before I could process it, leaving me with two small pumpkins. I’ll get four pies out of them.

If you didn’t grow your own, buy a sugar pumpkin. They are smaller and rounder than the Connecticut Field or Howden pumpkins that are grown for jack-o’lanterns. Or use a butternut squash. All make very good pumpkin pies. You can try making a pie with a field pumpkin, but the flesh of some of them can be fibrous and flavorless, not ideal for cooking.

Cut the pumpkins in half and scrape out the seeds and stringy fiber with a serrated grapefruit spoon.

If the pumpkin was an heirloom variety, not a hybrid, you can save the seeds for planting next year. Spread them out on a paper towel to dry, stirring them occasionally to ensure that the ones on the bottom dry out too. Store in a plastic baggie.

Some people like to eat pumpkin seeds, but I’m not among them. That is, unless someone else has taken off the hulls. I don’t like chewing all of that fibrous seed husk. But if you want to make your own pumpkin seeds, toss them with oil, salt them and bake. Not sure how long or at what temperature, but probably 300 degrees F for 15 minutes.

Put the scraped pumpkin halves cut side down on a cookie sheet, add enough water to cover the bottom of the sheet and bake at 350 degrees F for 60 minutes.

The pumpkins are done when a fork slips through the skin and flesh easily. Note that two of the halves above have fork piercings in them. Let the pumpkins cool enough to be able to handle them comfortably. 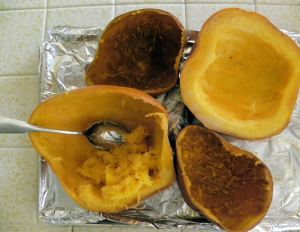 Use a serrated grapefruit spoon to scoop out the cooked pumpkin flesh, leaving the rind behind.

The rinds go into the compost bin. The scooped out flesh goes into a colander.

I use my mother's old colander that dates back to the 1930s. It still works fine. Modern cooks call this a "chinois."

Rotate the pestle, pushing the flesh through the small openings. The long fibers will stay behind in the colander. You can also use a potato ricer for this job. You could use a food processor instead of the colander, but I don’t like the texture of the resulting product as much. It comes out with a texture more like baby food, and yet can still have long strings in it if you use a food processor.

Scrape the last of the pulp from the outside of the colander.

Scrape the outside of the colander to get all of the pumpkin pulp, and measure it in a cup. You will need 1 3/4 to 2 cups of pumpkin for most recipes. If I’m working with large pumpkins, I measure out 2 cup quantities of pulp puree and freeze it in baggies. I flatten out each baggie before freezing so the pumpkin pulp will store flat in the freezer. Since each package is thin, it also thaws quickly when you want to use the pumpkin in a recipe. 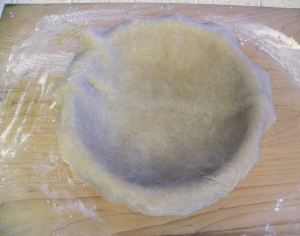 Flute or crimp the edges of the crust.

Assemble the ingredients for the pie filling. Note the eggs. They're from our hen Chicken Little. 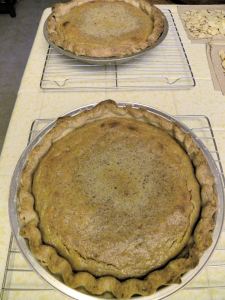 Two beautiful pies. These homemade pies will be more tan than the fluorescent orange of a store-bought pie.

There is absolutely nothing else like the taste and texture of a pie that you made yourself from a real pumpkin. Now here are the recipes.

For shortening, I use half Crisco and half butter. Mix dry ingredients. Using a pastry wire/blender, cut in the shortening until the mix is like cornmeal. Stir in the water bit by bit using a fork until the dough balls up around the fork. Roll half of the dough out on a floured pastry board. Use the upside down pie pan to measure the crust. You want a circle that is 1 inch larger all around than the pie pan. Fold the crust into half, then half again to transfer it to the pie pan. Unfold. Settle the crust into the pan and crimp the edges. Repeat for the second crust.

2 C pumpkin puree (or one can)

1 C sugar (I use organic sugar, which is a bit brown and has a great flavor)

Mix salt and spices with sugar. Beat the eggs and add other ingredients in order given, adding the sugar-spice mixture last. Pour into two 8″ pie shells and bake at 375 degrees F for an hour or until a knife inserted into the center comes out clean.

(If you don’t have organic sugar, substitute 1/3 c brown sugar for 1/3 C of the white sugar. The amounts of spices can be varied to give different flavors to your pies. Mace isn’t used much in cooking any more, but it is a fabulous spice and needs to be back on America’s spice shelf.)

I'm a retired medical researcher, retired professional writer/photographer, avid gardener, and active environmentalist living in southern California. I wrote a weekly newspaper column on environmental topics in the Huntington Beach Independent for many years. I also supervised environmental restoration projects and taught at the Orange County Conservation Corps before retiring in the summer of 2016. This blog chronicles my efforts to live a green life growing as much food as possible for my husband and myself on a 4,500 sq ft yard that is covered mainly by house, garage, driveway, and sidewalks. I am also dedicated to combatting global climate change.
View all posts by Lou Murray, Ph.D. →
This entry was posted in Uncategorized and tagged Amish pie pumpkin, bake pie, Connecticut field pumpkin, homemade, how to, New England pie pumpkin, photos, pie crust, pumpkin pie, recipe, step by step, sugar pumpkin. Bookmark the permalink.

6 Responses to How to make a pumpkin pie from scratch