Just in the time that I have been alive, there have been major changes in how I obtain my food. Add in the experiences of my parents and grandparents’ generations, and we see profound changes.

My mother was born in 1911 in the tiny town of Spencer, Indiana. Her father ran the livery stable in town, later selling those new-fangled automobiles. They lived a couple of blocks from the town square, and a few houses from the country. My grandfather kept a milk cow in a nearby pasture and milked it twice a day for the family milk supply. For the rest of their food, my maternal grandmother simply phoned in her grocery order, and a delivery boy brought it on his bicycle.

My mother told me that fishermen sold their daily catch from the White River. Market fishermen are pretty much a thing of the past. And market hunters–popular in the 1800s and into the early 1900s–are definitely a thing of the past. I’m sure my grandparents in southern Indiana had access to fresh passenger pigeons in their day, as well as ducks, geese, and venison. Many folks kept backyard chickens and rabbits for food. My Dad hunted rabbits his whole life, and fished as well. If he found a snapping turtle, we ate that. We did not get all of our food from the store. 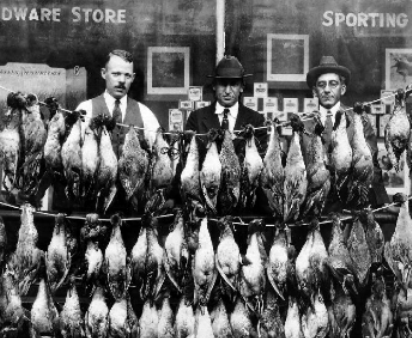 The offerings of market hunters.

My paternal grandparents lived in the city of Indianapolis, but they always had a garden. They also got a lot of their food from my grandfather’s sister’s farm in Tipton, Indiana. We did too. As a teen in the 1950s, I remember freshly killed stewing hens and big bags of lettuce, green beans, tomatoes and corn on the cob that came from the farm. But most of our food came from the grocery store. 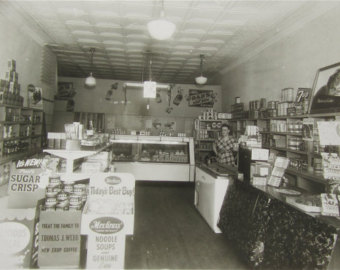 This isn’t Harry Grasshof’s store, but this is what it looked like. I don’t remember his store ever being this well stocked though.

When I was 7 years old, my mother would send me to the store for the odd item that she had forgotten, like an extra carton of milk or loaf of bread. The tiny store was a couple of blocks from our house. Harry Grasshof, an immigrant from Germany, ran the market. I gave Harry my list, and he got whatever I needed and bagged it for me to carry home. The store had only two aisles, with a very limited selection of goods. Potatoes, onions, apples, oranges, grapes, bananas, lettuce, green beans, carrots and such were available, but not all things were there in all seasons. The produce was local and in season. In the winter, we relied on canned vegetables and long keepers such as potatoes and cabbages.

The meat case had cuts that Harry had butchered himself, and the edges of the meat were dried. There were flies in the case in the summer. There were a few boxes of Tide, All, Oxydol, Duz, Ajax and other cleaning products on the shelves, plus canned fruits and vegetables. We ate canned green beans, corn, asparagus and beets. The only baked goods I remember were loaves of Wonderbread. 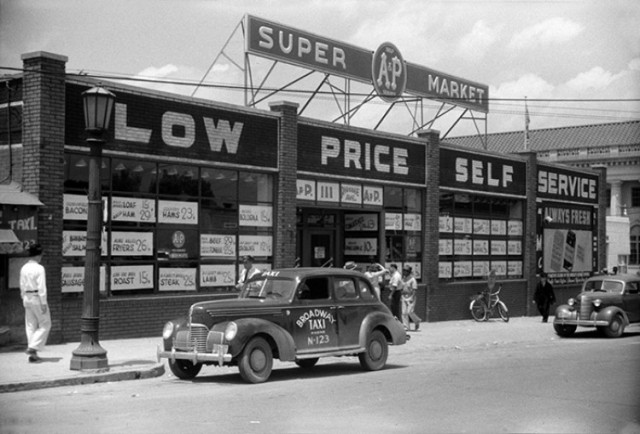 This isn’t our local A&P, but it looked like this. Such a selection!

Then the first supermarket, an A&P, opened up across the street from Harry Grasshof. That was probably about 1953. I was dazzled by the big, bright aisles with all of their selection. Meat was packaged. No more flies. Produce aisles were packed with beautiful, fresh fruits and vegetables. They had treasures like Twinkies, Hostess Cupcakes, and Little Debbies. One got a cart and helped one’s self to whatever one needed — or was induced to buy on impluse. No more personalized service from a grocer who helped customers one at a time.

People grew Victory Gardens during World War II, but when the soldiers came home, home gardening seemed to die out. Grocery stores carried more and more items and they came from farther and farther away. Then came the hippie movement, a back-to-basics mindset that included growing one’s own food. Jim Crockett started Crockett’s Victory Garden on PBS out of Boston. I lived on a 7-acre farm in Higganum, CT in 1976, following advice from Jim Crockett. My husband and I raised lambs and grew our first garden together. I hadn’t had a garden since I was an ag major at Purdue University in 1963, but I have been gardening pretty much ever since.

Today we have big modern grocery stores all over the place with an unbelievable selection of goods from near and far. Fresh produce of all types is available year round. If the US isn’t harvesting strawberries and blueberries, the stores carry them from farms in Australia or Chile. People forget that produce has seasons. You just go to the store and it is there. But that incredible availability comes at a cost. Not just to your pocketbook, but to the environment. Food travels an average 1500 miles to get to your table, and that adds a LOT of carbon dioxide to the atmosphere from the trucks, planes and ships that bring your food to you from the four corners of the world. Even local food travels. We live in Orange County, CA. Our carrots are grown in the Imperial Valley in San Diego County. But before they get to us, trucks haul those carrots up to Bakersfield for washing and packaging. The they come back to Los Angeles, and then Orange County.

People concerned about such things as saving civilization from the ravages of global climate change are paying more attention to where their food comes from. Many are growing their own. Others are patronizing farmers markets. Every little bit helps.

I recommend reading Barbara Kingsolver’s “Animal, Vegetable and Miracle,” as well as Michael Rhulman’s book, “Grocery,” which is a brief history of America’s grocery stores in the 1900s. See if you don’t think differently about food after that.

I'm a retired medical researcher, retired professional writer/photographer, avid gardener, and active environmentalist living in southern California. I wrote a weekly newspaper column on environmental topics in the Huntington Beach Independent for many years. I also supervised environmental restoration projects and taught at the Orange County Conservation Corps before retiring in the summer of 2016. This blog chronicles my efforts to live a green life growing as much food as possible for my husband and myself on a 4,500 sq ft yard that is covered mainly by house, garage, driveway, and sidewalks. I am also dedicated to combatting global climate change.
View all posts by Lou Murray, Ph.D. →
This entry was posted in Uncategorized. Bookmark the permalink.