My garden took a back seat earlier this month to travel. This is the first of two parts, with the second part being a photography workshop in Grand Teton National Park. But first, Yellowstone.

My hubby, Vic, had to teach college. I was accompanying my photography buddy, Mark Singer. He wanted company on a photo workshop in the Tetons. We wanted to see Yellowstone as well, so took a few extra days before the workshop. We flew from Long Beach, CA to Salt Lake City, UT and rented a car there, driving to West Yellowstone for the first night.

Day 2 began at the Grizzly and Wolf Discovery Center for some photo ops of captive grizzlies and wolves. 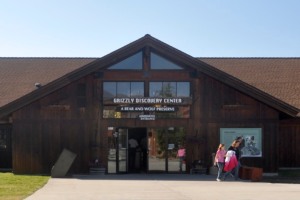 Grizzly and Wolf Discovery Center in West Yellowstone is well worth the $10 admission.

The keepers hide food throughout the pens so the bears have to hunt for it. They turned over rocks and logs to get to their food. 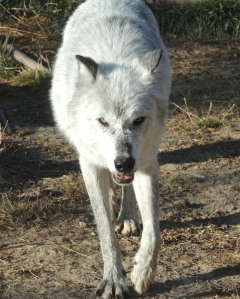 The pen had good backgrounds for viewing the wolves. This photo was taken with a Nikon P510. 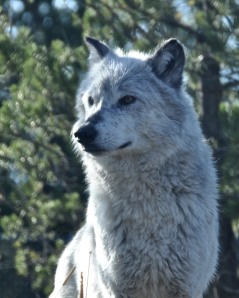 I was using two different cameras. This photo was taken with a Nikon D90 with 200 mm telephoto zoom lens. 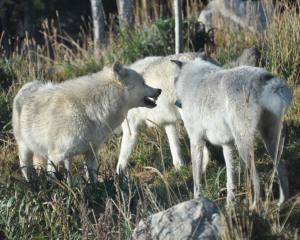 Wolf behavior. One is snarling with ears back and tail down, the other with tail out straight.

This bison herd just kept coming and coming over the ridge. I got goosebumps because I had never seen this many bison before, and never on the move like this. 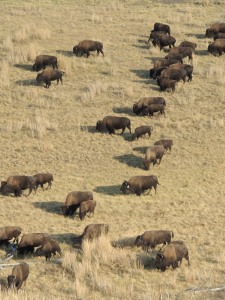 Young bison calves are red when they are born. This little guy was born late in the season and may not have the size and strength to make it through winter. 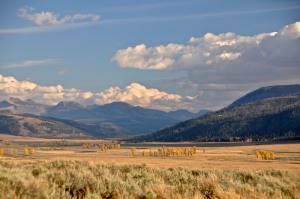 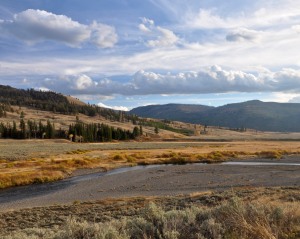 Autumn along whatever the heck this creek is named. Sorry, the places kind of blended together for me. Near Lamar Valley, if not in it. 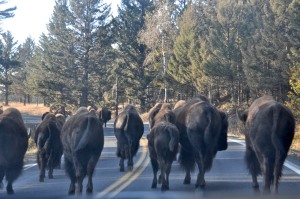 Bison were everywhere. In places, the road provided the easiest place for them to travel, so we just snaked along behind them, moving at a bison’s pace. 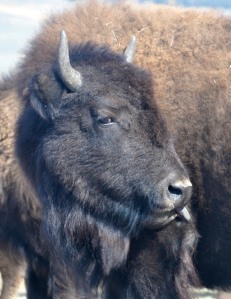 We stayed in cabins at Mammoth Hot Springs. I was thrilled to see elk grazing around our cabins in the morning. But there was no time to enjoy them. We had hired a guide for the day to increase our chances of seeing wolves.

Day 3, we met our guide from Yellowstone Safari at dawn at the Roosevelt Gate near Gardiner. 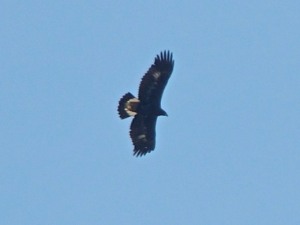 Our guide found wolves for us. There is one resting out of sight under the aspen. We saw two black wolves and a gray from the New Pack, but I was too excited looking at them to remember my camera. We got a good look as they trotted up the game trail at the lower right, and crossed over to the left behind the aspen and out of sight. They had a fresh elk kill beyond the trees and out of sight to the left.

Bison were everywhere. So exciting to see so many of them, especially since the Yellowstone herd used to be culled to keep the population at 300. Now it numbers about 5,000. 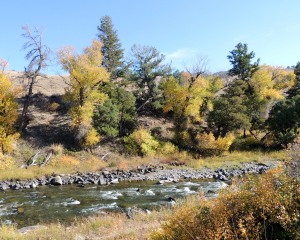 Fall along the Gardner River. The river and town are spelled differently. Don’t know why.

Dipper in the Gardner River. This little bird hunts for invertebrates under water. 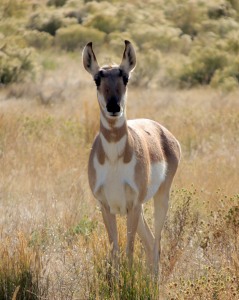 Female pronghorn. The males were still busy keeping herd on their harems. They marked their territories by pawing the ground, urinating and then defecating on the pawed spot.

Dozens of robins were migrating along the Gardner River, feeding on juniper berries.

While we were in the park, I renewed my membership in the Yellowstone Association. They lead great tours of the park, and do a lot of good work there. Their headquarters is here in Gardiner.

After Mark and I dropped off our guide in Gardiner, we went back into the park to look for elk and other things to photograph.

A large number of elk hang out at Mammoth Hot Springs, so it was no trick finding them.

This bull elk was surrounded by photographers. It was difficult to get a photo without tourists with little point and shoots right in his face. It’s a wonder more people aren’t killed or maimed. People have no sense around wildlife.

Black-billed magpie. After the sun went down, we had dinner at the Mammoth Hot Springs dining room. I think I ate elk or bison nearly every day on this trip. 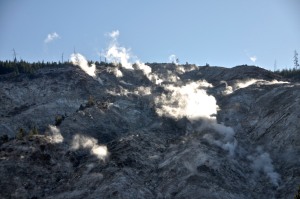 We stopped at a few geothermal features, but not all of them having seen them on previous trips.

We stopped to watch this coyote hunting for mice. It’s called mousing. 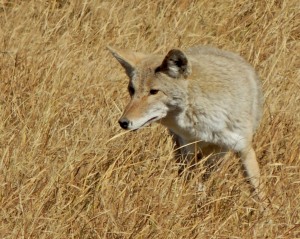 He/she was really intent on finding a mouse or vole, but we didn’t see any success in its hunt. 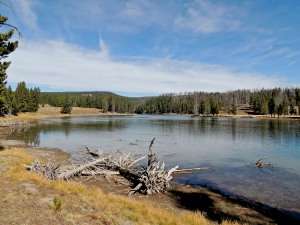 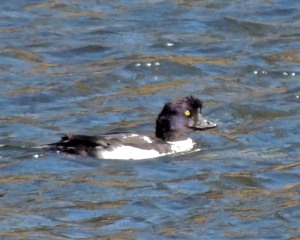 We stopped for a picnic along Yellowstone Lake. This Clark’s Nutcracker was very interested in our lunch.

Gray jays wanted their share of our lunch too.

I’m going to stop here most of the way through Day 4 because the next photos were taken in Grand Teton National Park. That will be another post. Hope you enjoyed this brief tour of Yellowstone. Great trip.