Since I started the 2012 canning season with pickled beets in February and a batch of lemon-ginger marmalade last week, I thought I’d take stock of my cupboard of remaining home-canned foods.

Ingredients for Lemon-Ginger Marmalade: 4 Meyer lemons, one navel orange and fresh ginger the size of a walnut. All of these are organic and from my garden.

That’s 35 jars of canned stuff, not counting the gallon of dill pickles in the refrigerator. My freezer inventory is less precise but includes some mashed pumpkin, at least 3- 16 oz packages, maybe as many as 5, and 2 packages of snow peas.

I also have nearly two dozen eggs frozen in two-egg packets. I lightly mix the eggs, add a bit of salt, and freeze them in small ZipLoc baggies, 2 eggs to a baggie. Since I know that my hens stop laying in winter, I now have some eggs put by to tide me over November-January until they begin laying again.

My latest batch of Meyer Lemon-Ginger Marmalade was fabulous, but I’ll never be able to duplicate it. Here is what I did. This is certainly not a “how-to” because of, well, you’ll see. 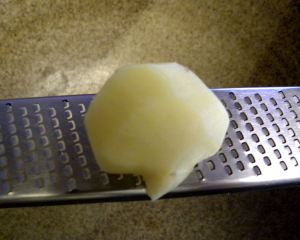 Peel the brown outer skin off a walnut-sized piece of fresh ginger, and grate with a microplane grater.

You’ll end up with about 1.5 tsp of grated ginger. 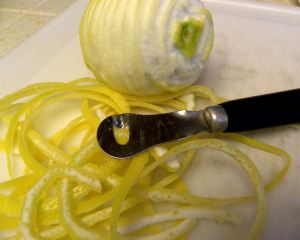 Now here is where I screwed up. I was supposed to either soak the seeds and/or the entire diced lemons in water overnight. I think that is where the pectin comes from. You need pectin to gel the marmalade. Because I didn’t do that, I decided to modify the recipe and use packaged pectin. But if you use packaged pectin, you add less water and more sugar. So here is what I did. The juice etc. added up to a little over 3 cups. I added water to make 4 cups, then added another cup of water. I cooked the juice etc for an hour, then added 6 cups of sugar, which is more than what my original recipe (without added pectin) called for. I also added a packet of pectin. However, it was 15 years old, and I’m not sure it was any good. The marmalade was supposed to gel within two minutes, but it took another hour of boiling for it to gel. The final product was wonderful, with perfect taste and consistency. Too bad I’ll never be able to do this again exactly the same way. 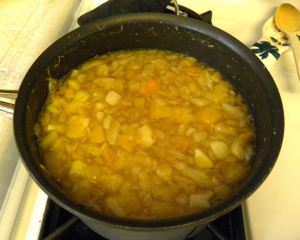 Cook the marmalade until it sheets off a spoon in one sheet rather than in two separate drops. Put in hot, sterile canning jars, seal and process in a hot water bath for 10 minutes. Place on a cloth towel to cool. Label and store.

So that was my adventure in making marmalade. To see how others are using their harvests or stored produce visit Robin at The Gardener of Eden.

I'm a retired medical researcher, retired professional writer/photographer, avid gardener, and active environmentalist living in southern California. I wrote a weekly newspaper column on environmental topics in the Huntington Beach Independent for many years. I also supervised environmental restoration projects and taught at the Orange County Conservation Corps before retiring in the summer of 2016. This blog chronicles my efforts to live a green life growing as much food as possible for my husband and myself on a 4,500 sq ft yard that is covered mainly by house, garage, driveway, and sidewalks. I am also dedicated to combatting global climate change.
View all posts by Lou Murray, Ph.D. →
This entry was posted in Uncategorized and tagged home canning, how to, Kitchen Cupboard Thursday, lemon marmalade, recipe. Bookmark the permalink.