I built a raised garden bed by myself

Those of you who are tool-proficient will think nothing of this, but for this old granny, it was a major accomplishment and an adventure in using my new bag of power tools.

A few months back, I bought a set of cordless power tools so I could dismantle my lovely redwood raised beds at the community garden. But I never got around to it and the garden committee did it for me. My new tools sat untouched. 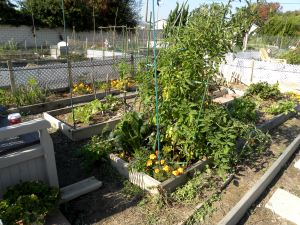 My plot at the Huntington Beach community garden had nice raised beds made of redwood. This shot was in November 2011, shortly before the beds were dismantled.

The reason why I had to remove my beautiful, one-year-old beds is that the landowner, Southern California Edison, disallowed raised beds. This has stifled my interest in gardening at the community garden so far this year.

My poor neglected community garden plot, full of weeds, with no raised bed borders. This shot was in March. 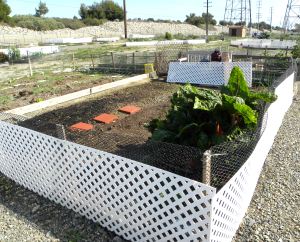 I weeded my plot, but so far haven’t planted it. I have plans to put in beans and winter squash, at the very least. But right now, all that is growing there is chard, onions, and garlic.

The nice people on the garden committee even delivered the redwood boards to our home, because I don’t have a vehicle into which the boards would fit. My plan was to build a new raised bed where my Garden of Infinite Neglect sat in front, growing no vegetables.

An aside–I work at the Orange County Conservation Corps. The exterior bed borders for our plots were built by my Corps Members last year, and those outer bed borders are allowed to remain. I swear, there is no rhyme nor reason to Edison’s rules, since my inner bed borders are exactly the same as the outer borders.

I had watched my Corps Members build the borders and it didn’t look too hard. My husband built my raised beds at the community garden with a borrowed cordless drill, and I watched him too. I was pretty sure I could do this. I had the corner brackets, the screws, and the redwood already cut into the proper length for me to build a bed in our front yard. And I had a nice cordless drill that I could use to put in the screws.

Now you might be wondering about my last post on saving energy by making sun tea, juxtaposed with this post on using power tools. Hand tools are no longer an option for me because I’m pretty much crippled with arthritis in my hands and knees. I just don’t have the strength any more to put in a screw using a hand screwdriver. However, I was intimidated by my new drill. I had used a corded drill to both drill holes and put in screws, but never a cordless drill. Well, after reading some of Bee Girl’s posts about her Tool Girl, I decided that I could do it. So Tool Girl, even though we have never met, THANK YOU for your inspiration.

Fortunately, my boards were already cut to lengths that I wanted. All I had to do was juxtapose the ends, bracing them with my foot, and drill in the screws. Piece of cake. You can see that these are reused boards by the old drill marks.

My husband carried the heavy bags of compost to the raised bed and dumped them for me.

I filled the beds with a mixture of what Miracle-Gro calls organic garden soil (looked like sawdust and wood chips to me), potting soil, and steer manure, then dug it in well, mixing in dirt from below the bed. This bed is 12 ft long and 3 ft wide.

This is the new bed looking from the other direction. The Lacinato and Scotch Blue-curled kale were left over from last year. Ditto the chard at the other end. I uprooted the rest of the chard and kale and fed it to my chickens.

I drilled deck screws into the tops of the boards at one foot intervals, and threaded string around them to delineate foot square grids. I did this in part to facilitate square foot gardening, and in part (I hope) to discourage neighborhood cats from using my raised bed as a litter box. The cucumber trellises are from Gardeners Supply Company.

This bed is my rejuvenated Garden of Infinite Neglect. It has languished for a couple of years, sadly neglected. I thought for a while about why that is, and decided that it is because the hose doesn’t reach and watering it is very ackward and unsatisfying. Well, there was a solution to that problem. I bought a longer hose! And a nice watering nozzle. Problem solved. (I hope.)

I planted some almost-ready-to-harvest transplants of Red Sails lettuce and Joi Choy Pak Choy (the same as bok choy?). Being an impatient sort and having gotten a late start on the season, I planted basil, yellow crookneck and yellow straightneck summer squash, and butternut squash from transplants instead of seeds. I know, shame on me. Squash are so easy to grow from seeds. The marigolds are also transplants.

I planted seeds of Tendergreen Burpless and Straight Eight cucumbers, Black-seeded Simpson lettuce, Scarlet Runner Beans, Lutz Greenleaf beets, Kyoto Red carrots, and Redhead radishes. I think that I planted some things too close together (like the summer squash), even though I have a string grid to go by. Oh well. I grow a Darwinian garden. Survival of the fittest.

I still have a few more garden chores to do at home, and then I will tackle my community garden plot. Spring is still springing at our house.

I'm a retired medical researcher, retired professional writer/photographer, avid gardener, and active environmentalist living in southern California. I wrote a weekly newspaper column on environmental topics in the Huntington Beach Independent for many years. I also supervised environmental restoration projects and taught at the Orange County Conservation Corps before retiring in the summer of 2016. This blog chronicles my efforts to live a green life growing as much food as possible for my husband and myself on a 4,500 sq ft yard that is covered mainly by house, garage, driveway, and sidewalks. I am also dedicated to combatting global climate change.
View all posts by Lou Murray, Ph.D. →
This entry was posted in Uncategorized and tagged build, cucumber trellis, Gardener's Supply Company, how to, Huntington Beach Community Garden, Orange County Conservation Corps, raised beds, vegetable garden. Bookmark the permalink.

12 Responses to I built a raised garden bed by myself