How to Make Soldier Bean Soup and Onion Puree

I have two recipes to share today. The first is onion puree. I have already used all of my homegrown onions, so I had to use store-bought. But the garlic and parsley were my own.

Saute one sliced yellow onion and four cloves of garlic in 2 T butter. As soon as the onions turn translucent, add 1 C chicken broth, cover, and simmer for 20 minutes. Puree in a blender or food processor. Return to pan, add 1/2 tsp dry tarragon, and simmer uncovered until reduced to a thick sauce. Add 1/4 to 1/2 C chopped parsley. Serve on steak, a roast, or whatever.

I think that this onion puree could be easily changed by substituting cumin, curry, paprika, etc. for the tarragon. As it is, it’s like a lo-cal Sauce Bernaise.

Onion puree is at the top next to the grilled steak. 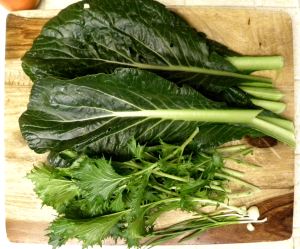 Komatsuna on top, Mizuna on bottom, sprouted garlic at lower right. These greens are Japanese mustard greens, great in stir frys and soups.

My garden is producing mizuna and komatsuna in abundance, so I’m looking for new ways to use them. They went into the bean soup below. The garlic doesn’t have to be sprouted. I just harvested these a bit late and they had started growing again. The tender garlic greens are edible at this young stage.

My husband brought back a bag of dry European soldier beans from a specialty market in the San Francisco Bay area recently. The beans were large and cream colored, with the markings of a red toy soldier at the hilus. They are a New England heirloom bean, also known as Red-eyes, and are often used for baked beans. I wanted to make soup out of them. It was the best bean soup I’ve ever eaten.

The beans cooked quickly, the red color stayed, and the beans were fabulous–creamy not mealy with a wonderful, slightly sweet, beany flavor. I am saving some of these beans to grow in my garden next year. You can also buy them from Vermont Bean Company, and probably other seed vendors as well.

I am so impressed with Soldier Beans that I’m definitely growing my own next summer. They come in either pole or bush. Since mine came in a bag destined for soup, I have no idea what kind they are. The label says European Soldier Beans, so maybe this is a European cultivar.

I don’t have time to post a photo of the dry beans. I’m late for work. If you have produce that you cooked this week, visit Robin at the Gardener of Eden.

I'm a retired medical researcher, retired professional writer/photographer, avid gardener, and active environmentalist living in southern California. I wrote a weekly newspaper column on environmental topics in the Huntington Beach Independent for many years. I also supervised environmental restoration projects and taught at the Orange County Conservation Corps before retiring in the summer of 2016. This blog chronicles my efforts to live a green life growing as much food as possible for my husband and myself on a 4,500 sq ft yard that is covered mainly by house, garage, driveway, and sidewalks. I am also dedicated to combatting global climate change.
View all posts by Lou Murray, Ph.D. →
This entry was posted in Uncategorized and tagged bean soup, broccoli, cauliflower, garlic, onion puree, recipe, Soldier beans, stir fry. Bookmark the permalink.