Harvesting Potatoes and Sunchokes in December

It’s Harvest Monday again. (Well, actually it’s Tuesday because I do my newspaper column on Mondays and usually run out of time for blogging). I actually have a decent harvest to report this week ending December 5, because I harvested the German butterball potatoes and sunchokes (Jerusaleum artichokes) that I grew in Smart Pots this summer/fall. 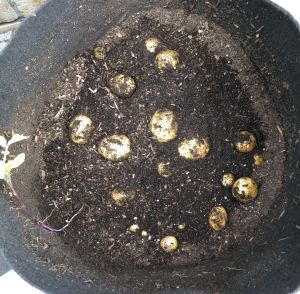 Layer of potatoes that grew about six inches below the surface.

I planted the potatoes (from the farmer’s market because I don’t have enough space in my garden to warrant ordering “seed potatoes” from a catalog) in a layer that was about four inches from the bottom of the pot. I started by cutting German butterball potatoes into pieces,  with an eye showing on each piece, and laying the pieces on the potting soil plus fertilizer. I covered the potatoes with a layer of potting soil and waited until the foliage was about 6-8 inches high before adding more soil. I kept the pot watered and fertilized all summer. 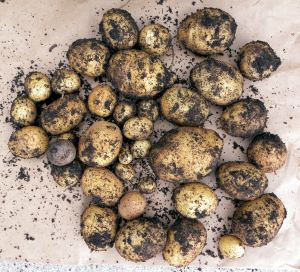 I harvested 2 lbs 9 oz of German butterball potatoes from one Smart Pot.

Once the foliage dies back, the potatoes are ready for harvest. They’ve actually been ready to harvest for a month now, but I just got around to it last week.

I scooped potting soil from the top into another container by hand until I hit a potato layer. No shovel means no cut potatoes.

In theory, the potato plant will send runners off the main shoot and form multi-layers of potatoes. I got two layers of potatoes, which added up to 2 lbs 9 oz. The ads for these fabric Smart Pots claim that you can grow 50 lbs of potatoes in one. I doubt that very much. I don’t think that 50 lbs of potatoes would even fit in one of those pots. If I had gotten another layer of potatoes, I might have ended up with 5-6 lbs, but so far a harvest of about 3 lbs is par for the course.

I’ve grown blue potatoes and German butterballs so far, because they’re expensive at the store. I may try Russets some day just to see what kind of yield a big, heavy potato would give me in a Smart Pot.

I also grew sunchokes in a Smart Pot this year. They are a vegetable from the Great Plains that Native Americans ate. Sunchokes spread like crazy from the little tubers left behind after a harvest, so I didn’t want to plant them in my yard. I had never heard of anyone growing them in a Smart Pot, but I didn’t see why they wouldn’t. Well, they did just fine in the Smart Pot.

I started with organic tubers from the grocery store, planting five cuttings in one pot. Each tuber grew into a multi-stalked sunflower. The sunflowers themselves were pretty puny as far as sunflowers go, with few flowers. But when I dug down for tubers, I was pleased. The plants had put all of their energy into making tubers! 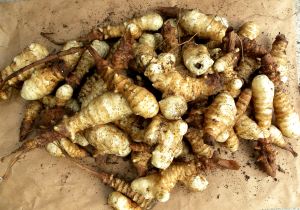 I harvested 3 lbs 4 oz. of sunchokes from one Smart Pot.

Sunchokes taste like artichoke hearts with the texture of potatoes. But they’re not my favorite vegetable because they have a tendency to produce gas. I’m hoping that these modern cultivars will be an improvement in that department. I’ll probably cook some up for lunch. They taste great sauteed with mushrooms and peas. The rest of the tubers will get stored in the refrigerator. 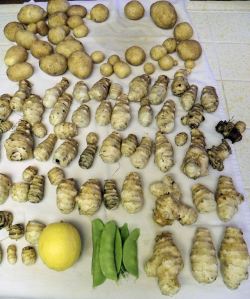 This week's harvest also included a Eureka lemon that fell off the tree and the first snow peas of winter. 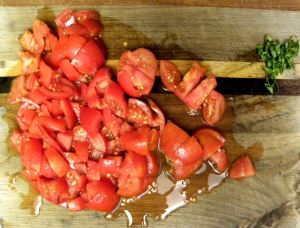 The last of the tomatoes in the frig, and a bit of basil from the herb garden, went into a sauce for pasta.

Harvest Monday is also a time to blog about stored produce that was eaten in the past week. The last of our tomatoes in the refrigerator went into a pasta carbonnara sauce that went over ravioli. I have one basil plant that still has a few leaves left on it, and some of those went into the sauce as well. The spinach was from the store. 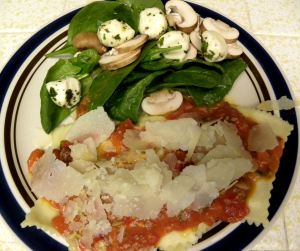 Dinner from the garden: cheese ravioli with carbonnara sauce and shaved Parmesan, plus a salad of spinach, mushrooms, and mozzarella balls.

This is probably my next to last decent-sized harvest for a while. I’m pinning my last hopes for a harvest in pounds instead of ounces on yams from a Smart Pot, and horseradish from a pot. After that, I expect nothing but greens. Oh, I forgot about the citrus crop. Oranges and lemons will be ripe soon, and that should beef up the harvest poundage totals.

Visit Daphne’s Dandelions to see what others are harvesting (or using from their harvests) this week.

I'm a retired medical researcher, retired professional writer/photographer, avid gardener, and active environmentalist living in southern California. I wrote a weekly newspaper column on environmental topics in the Huntington Beach Independent for many years. I also supervised environmental restoration projects and taught at the Orange County Conservation Corps before retiring in the summer of 2016. This blog chronicles my efforts to live a green life growing as much food as possible for my husband and myself on a 4,500 sq ft yard that is covered mainly by house, garage, driveway, and sidewalks. I am also dedicated to combatting global climate change.
View all posts by Lou Murray, Ph.D. →
This entry was posted in Uncategorized and tagged gardening in containers, Harvest Monday, Jerusalem artichoke, potatoes, sunchokes. Bookmark the permalink.

17 Responses to Harvesting Potatoes and Sunchokes in December