The first egg in our new chicken coop, laid by Chicken Little!

I’m as excited as a new grandmother. Chicken Little, our Black Australorp, laid the first egg a bit after noon today. She went into the coop around 11:30 and began “building.” I have no idea what she was doing, but it sounded like construction with a lot of bumping, thumping, and scratching.

When she came back out of the coop around noon, I peeked in. No egg. But the nest boxes were scratched down to bare wood, straw scattered everywhere. I thought she might want more straw, so I added some. She went back into the coop and continued bumping and thumping, then settled down. Silence.

Chicken Little--she's supposed to be a Black Australorp, but look at all that red in her throat. She has a lot of green on her black feathers, but I think there's some Rhode Island Red in her ancestry somewhere.

Soon there was some soft clucking. I thought hens really cackled when they laid an egg, so I didn’t expect one. She came back out of the coop to join Henrietta and Henny Penny, so I peeped in again. And there it was! Our first egg! And it only cost us $1,000.

How’s that, you ask. Well, the coop cost us $800 (built by a friend out of mainly recycled materials). A permit from the city of Huntington Beach (permanent, not annual), cost us $189. The feed trough, watering trough, and a can to store the feed cost another $54. I installed a solar light on the coop to help deter nocturnal predators. There went another $80. That’s $1,123 of non-recurring costs. (The solar LED light from Gardener’s Supply Company will probably be a recurring cost, because I’m not sure how long those things last.)

The first bag of laying pellets (feed) cost $15. I’m not sure how long it will last. Next time, I will buy organic feed, now that I know that our local feed store carries it. That will cost $25 a bag.

Henny Penny, a Black Sex-linked hen (cross between a Rhode Island Red and a Barred Plymouth Rock). Isn't she pretty?

And then there was the cost of the hens. I naively thought that they might be as much as $8, based on the price of a cleaned, packaged broiler in the grocery store. Ha. My laying hens cost me $25 apiece. 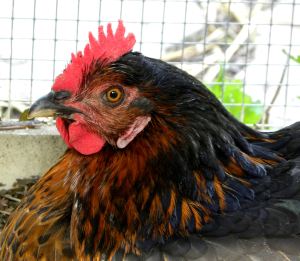 Henny Penny has the most red of our three black hens.

Chicks are a lot cheaper (about $16 for 5 one-day-old chicks mail ordered from www.randallburkey.com, plus shipping fees). But to raise chicks, you need a brooder (heat source) for the first few weeks. I didn’t want to invest in a brooder for my little backyard coop, and I didn’t want to wait the five months it takes to raise the chicks until they’re old enough to lay. So I went for broke, as they say, and bought laying hens.

Henrietta, a Black Sex-linked hen. She has the least red of the three hens.

I calculated earlier that my recurring costs of straw and feed might be $100 a year. I also naively thought that I might get as many as 18 eggs a week. Not bloody likely. A good laying hen produces about 200-240 eggs a year. I’ll probably average a dozen eggs a week, at least for the first year. They don’t lay as many eggs after they’re two years old, and two of my three hens are already a year old.

Ignoring my one-time costs (which I can do since I’m a biologist, not an economist), that comes out to around $2 per dozen of organic, free-range eggs from happy California chickens.

But to have your own fresh eggs that came from well-cared for, free-range hens in your own backyard? Priceless.

I'm a retired medical researcher, retired professional writer/photographer, avid gardener, and active environmentalist living in southern California. I wrote a weekly newspaper column on environmental topics in the Huntington Beach Independent for many years. I also supervised environmental restoration projects and taught at the Orange County Conservation Corps before retiring in the summer of 2016. This blog chronicles my efforts to live a green life growing as much food as possible for my husband and myself on a 4,500 sq ft yard that is covered mainly by house, garage, driveway, and sidewalks. I am also dedicated to combatting global climate change.
View all posts by Lou Murray, Ph.D. →
This entry was posted in Uncategorized and tagged backyard chickens, Black Australorp, Black Sex-linked, chicken coop, cost of raising chickens, free-range, Gardener's Supply Company, poultry economics, Randall Burkey Company, solar light, urban chickens. Bookmark the permalink.