It seemed like a good idea at the time. As part of our plan to become more self-sufficient and live sustainably, we decided to get some chickens. (When I say “we”, of course I mean ME. Hubby Vic is a reluctant participant in this project.)

Chickens for the Backyard: A beginner's guide

We’re hardly at the forefront of the urban chicken movement, since Sunset and National Geographic magazines, as well as the Los Angeles Times, all had articles on the subject last winter. I began researching the topic, going to www.chickencoops.com to get ideas. I sat down with my co-worker and carpenter friend, Simeon Jasso, to design a custom coop just the right size for three hens. 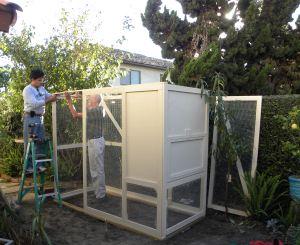 Simeon is assembling the run for the chickens. The roof will go on later.

Between my frequent out-of-town trips and Simeon’s schedule at work and his callups from the Navy Reserves, it took us many months to settle on a plan and get construction of Cluckingham Palace underway. The coop and run are now mostly finished, with the roof going on this Friday. The entire run is enclosed with half-inch mesh hardware cloth to keep out wild birds and urban wildlife (raccoons, opossums, skunks, coyotes, gray fox, red squirrels, ground squirrels–we’ve got ’em all). 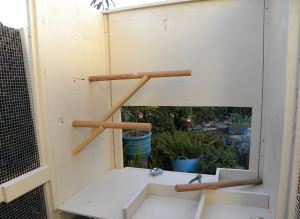 The interior of the coop has roosts and nesting boxes, with a door opening to the exterior for cleaning and egg-gathering.

To do this legally, I  needed a Huntington Beach city permit to keep chickens. That cost a whopping $189 (on top of the $800 for the coop, and another hundred or so for a feeder, waterer, carrying case (my husband plans to take a chicken to class every so often for his feather and bird anatomy lectures), etc. At least the city permit is for life, not an annual permit.

The city planning department sent notices to my neighbors that we planned to keep chickens, and that’s when the war began. Most of our neighbors are great people. But the people behind us have a bark-bark-barking mini-dachsund that has been the bane of my existence for its entire 15-year life. That nervous little dog–who lives outdoors–makes my life a living hell. Naturally, those are the people who are objecting to my chickens–which I don’t even have yet. They’re concerned about the noise. Unbelievable.

Some houses are one-story and some are two.

The city recommended that I get signatures from those neighbors who don’t object in order to counteract her letter of objection. Our neighbors are a cosmopolitan melting pot consisting of Cuban Jews, Vietnamese Buddhists, Egyptian Christians, Mexican Catholics and a couple of Anglo whatevers. Many of them had parents who kept chickens in the old country. They were delighted to have chickens in the neighborhood. So. No egg on my face.

I’m not sure why my neighbor with the noisy dog got her feathers all ruffled over this, but she’s going DOWN. The yolk is going to be on her. My coop construction and placement are within city code and I’m gonna be getting that permit. I hope. Stay tuned.

(To read more of Lou Murray’s environmental writing, see her weekly column, Natural Perspectives, in the Huntington Beach Independent at www.hbindependent.com, under columnists. Today’s column is on urban chickens! See it at http://www.hbindependent.com/articles/2009/10/29/blogs_and_columns/natural_perspectives/hbi-natural102909.txt/ It should remain online for 5 weeks.)

I'm a retired medical researcher, retired professional writer/photographer, avid gardener, and active environmentalist living in southern California. I wrote a weekly newspaper column on environmental topics in the Huntington Beach Independent for many years. I also supervised environmental restoration projects and taught at the Orange County Conservation Corps before retiring in the summer of 2016. This blog chronicles my efforts to live a green life growing as much food as possible for my husband and myself on a 4,500 sq ft yard that is covered mainly by house, garage, driveway, and sidewalks. I am also dedicated to combatting global climate change.
View all posts by Lou Murray, Ph.D. →
This entry was posted in Uncategorized and tagged chicken coop, sustainable living, urban chickens. Bookmark the permalink.