Review of our “Slow Food” Thanksgiving

I know that Thanksgiving is over and we are now in December, but I wanted to post some photos of our lovely dinner. While turkey is, of course, the centerpiece, our dinner featured apple and pumpkin pies that were made with homegrown, organic apples and a pumpkin.

Like many of my meals, this was a Slow Food dinner. I belong to Slow Food USA, a group that promotes cooking from scratch with locally and ethically raised food. Can’t get much more local than my own yard! 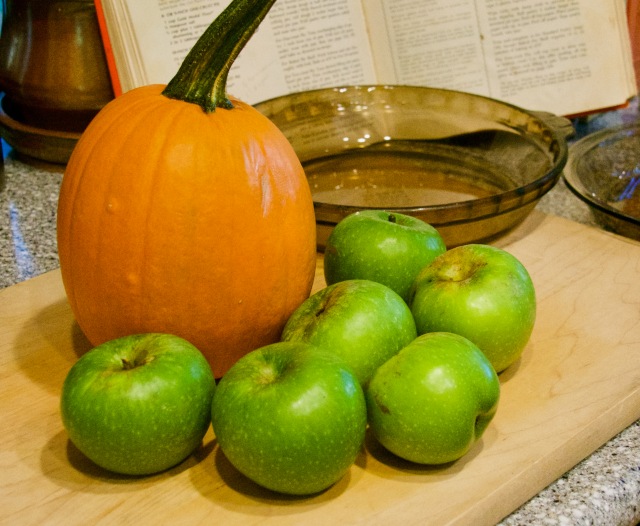 This is one of the sugar pumpkins that grew in our new Garden Box of Joyous Anticipation. The apples are from our semi-dwarf Granny Smith apple tree.

To make a pie from a whole pumpkin, cut off the stem, then cut the raw pumpkin in half and scoop out the seeds and strings. I use a serrated grapefruit spoon for that task. I put some of the seeds on a paper towel to dry. Once they are dry, which takes a couple of weeks, I put the seeds into a labeled ziploc baggie for planting the next summer.

I bake the pumpkin halves at 350 degrees F for about an hour, or until the pumpkin is fork tender. After it has cooked, I use a soup spoon to scrape out the baked pumpkin, leaving the shell behind. I put the pumpkin through a ricer to mash it up and make sure there are no strings. Then it can be used in any pumpkin pie recipe. One small sugar pumpkin makes one pie.

Here are the finished pies–a pumpkin pie and a crumb top apple pie, both made from scratch.

Some years we have purchased a heritage breed turkey, one of the old time breeds that can still reproduce naturally. Did you know that today’s big white turkeys are too heavy to reproduce naturally? The females have to be artificially inseminated. They get so big and heavy that they often have orthopedic problems, and have difficulty walking. Those heritage breed turkeys are truly delicious, and are certainly ethical. They are a great Slow Food choice. But they can be pricey, about $189 per 18-20 lb bird. So we don’t do that very often. This is a regular grocery store bird, a modest 12-lb turkey. The secret to a perfectly roasted turkey is to put a couple of stalks of celery, half an onion, several leaves of sage and 3/4 C good white wine into the body cavity. Pour some melted butter over the turkey breast and rub it all over. Then grate some Himalayan pink salt over the bird. Pop it into the oven at 325 degrees uncovered until the meat pulls away from the bone on the legs. The broth that forms in the pan is heavenly, and becomes the base for the best turkey gravy ever. Pour the broth into a separate pan, add an appropriate amount of flour and stir constantly until thickened. This is how my husband plates the carved turkey. We use rosemary from our herb garden as a garnish . I usually add fresh cranberries for additional garnish, but I used them all in the homemade cranberry sauce this year.

This is a place setting for our Thanksgiving table. The china was my maternal grandmother’s china. She bought it in the early 1940s, I think, or possibly the late 1930s. We ate Thanksgiving and Christmas dinner on these plates for many, many years at her house. Now I continue the tradition.

The other dishes were stuffing in a casserole, baked yams, roasted Brussels sprouts with bacon and basalmic vinegar, cauliflower au gratin, and homemade cranberry sauce. Oh my, was it ever delicious.

Even the bones from our turkeys don’t go to waste. Once the meat has gone into an endless number of turkey leftover dishes (esp turkey sandwiches), we turn the carcass into soup. Hope you enjoyed this review of our Thanksgiving dinner.

I'm a retired medical researcher, retired professional writer/photographer, avid gardener, and active environmentalist living in southern California. I wrote a weekly newspaper column on environmental topics in the Huntington Beach Independent for many years. I also supervised environmental restoration projects and taught at the Orange County Conservation Corps before retiring in the summer of 2016. This blog chronicles my efforts to live a green life growing as much food as possible for my husband and myself on a 4,500 sq ft yard that is covered mainly by house, garage, driveway, and sidewalks. I am also dedicated to combatting global climate change.
View all posts by Lou Murray, Ph.D. →
This entry was posted in Uncategorized and tagged apple pie, heritage breed turkey, how to, photo, pumpkin pie, pumpkin pie from scratch, roast turkey, Slow Food USA, Thanksgiving dinner, turkey, turkey gravy. Bookmark the permalink.

2 Responses to Review of our “Slow Food” Thanksgiving