No wonder the wily critter that was digging up my garden was so hard to catch. He wasn’t an oppossum, he was a raccoon!

Raccoon in a Hav-a-Hart live trap

I set our Hav-a-Hart live trap last night using a chunk of leftover meat that was too old for us to eat. Meaty bones or a can of cat food work equally well. You just put the food in one end of the trap and set the hook to hold the door open. The critter enters the trap to get to the food, steps on a treadle, and the door goes down, trapping the animal inside.

Since the critter won’t get anything else to eat the night that it’s trapped, I try to put enough inside to feed it. I also check the trap early in the morning so it won’t sit in the sun and dehydrate.

The trap goes into the back of my SUV for transport. 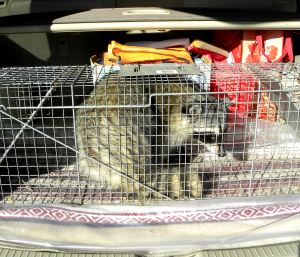 Trapped raccoon in the back of the car, ready for transport.

This big guy is making himself as small as possible in this vulnerable position. It is a frightening experience for the animal, so be sure to put down something old between the trap and the floor of your car, including a sheet of plastic. They tend to relieve themselves and could care less about soiling your vehicle.

The live traps have a metal plate under the handle to protect you from being bitten.

Next step is to release the animal back to the wild and away from your home. We use a wild area in our city’s main park about a mile and a half away from us that has plenty of cover, water, and wild habitat.

The critter gets the idea pretty quickly and heads for cover.

He’ll stay under cover until dark, and then he’ll find that he has a lot of newly restored habitat to explore with wild food aplenty. But just in case he wasn’t the only critter raiding my garden, I’m going to set that trap again tonight. One week we caught three animals in a row. Sometimes they’re possums and sometimes they’re not.

I'm a retired medical researcher, retired professional writer/photographer, avid gardener, and active environmentalist living in southern California. I wrote a weekly newspaper column on environmental topics in the Huntington Beach Independent for many years. I also supervised environmental restoration projects and taught at the Orange County Conservation Corps before retiring in the summer of 2016. This blog chronicles my efforts to live a green life growing as much food as possible for my husband and myself on a 4,500 sq ft yard that is covered mainly by house, garage, driveway, and sidewalks. I am also dedicated to combatting global climate change.
View all posts by Lou Murray, Ph.D. →
This entry was posted in Uncategorized and tagged Hav-a-Hart, how to, live animal trap, live trap, opossum, raccoon, urban wildlife, video. Bookmark the permalink.

9 Responses to Got him!